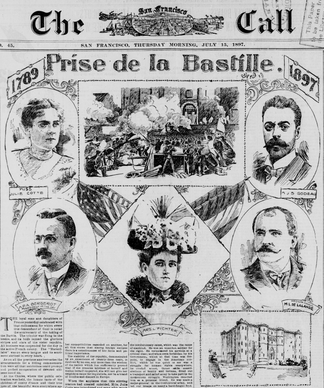 Ladies and gentlemen: San Francisco is one of the most cosmopolitan cities in the world, and from the very beginning its French population has been conspicuous in its development. Their love of the Republic, their enthusiasm for freedom, their artistic tastes and accomplishments have contributed to the up-building of the City and the strength of the State. The character of California's soil and climate, resembling-France, makes them feel at home, and has wedded them with ties of love and affection to the Golden State.

This is the French national holiday, and its significance is in full accord with the principles that underlie the structure of the American Government. America celebrates the 4th of July; France, a few days later, the 14th. The one following the other is more than a coincidence— it is a consequence. The example of America in 1776 was closely followed by the French people in 1789, and the success of freedom's cause in this country was the inspiration of French patriotism which overthrew that frowning emblem of despotic rule— the Bastille.

So, the Declaration of Independence ​was independence for America and France alike.

The two nations thus born of a common cause celebrate a common birthday in this month of July. They are Freedom's children and are drawn together almost unconsciously by fraternal bonds. Therefore, my fellow-citizens, we are together today. The friendship of the two countries, formed in the infancy of national life, has been enduring, and long may it endure. 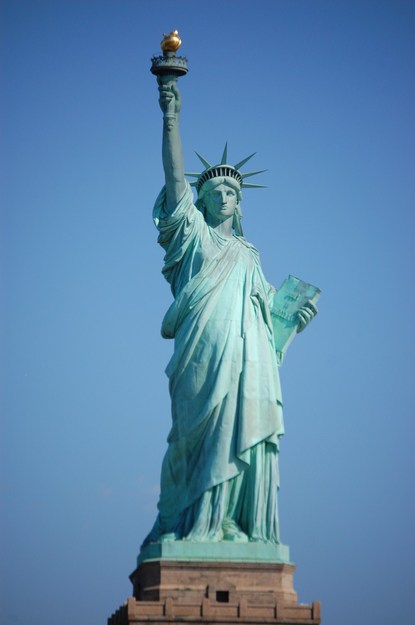 When, France presented the statue of Liberty to the United States, what form did the acknowledgement take? American citizens forthwith set up in Paris a statue to Lafayette. For the fame of Lafayette, the lover of liberty, pure patriot and generous friend, is as dear to the American heart as to the people of France. It is an obligation of the two countries to preserve his fame, and it should be honorable and becoming in humanity itself, as in the case of Washington, to assert that no country can claim him, and that he was a gift of Providence to the human race.

The part that he played in establishing the independence of America perhaps saved the revolutionary cause, which was the cause of mankind. He was an unselfish soldier for the right. ​He volunteered his services at a critical time; and when even forbidden by his Government, which at that time was despotic, to engage in the American conflict, which he was quick to see was a struggle for human rights everywhere, he evaded arrest, thrust aside considerations of family and fortune, fitted out a transport and sailed away to take part in the momentous struggle.

​Washington received him as a, personal friend. He was made a major-general in the Continental army, and led our troops on many a hard-fought field. And when the fortunes of war were wavering in the balance, he went back to France for aid, and without that aid which he secured we can only, gather from the words of Washington what might have been the outcome of the Revolutionary War, upon which so much depended.

Washington wrote at this time to the American representatives in Paris: "We are at the end of our tether, and now or never deliverance must come." It came with Rochambeau and De Grasse. France, moved by the ardor of Lafayette, saved the cause of the colonies and stirred Thomas Jefferson to exclaim in the transport of his joy, that henceforth every American has two countries— his own and France.
​
The Mayor's eloquent address, which was frequently interrupted by enthusiastic applause, was followed by "The Star Spangled Banner," sang by a quartet of soprano voices.  Why do American celebrate Bastille Day? DETAILS IN FRENCHLY, OUR PARTNER PUBLICATION: HTTPS://FRENCHLY.US/WHY-DO-AMERICANS-CELEBRATE-BASTILLE-DAY/
This is a non-smoking event © 2021 The Official Committee of French-American Organizations of the Bay Area.